If you are interested in building your own Li‑ion battery packs, perhaps for drone use, e-bikes, hacky racer or for a power wall project, you have probably considered a battery spot welder. Like many tools, there’s a range of offerings available, from cheap PCB-based spot welders you run from a well-specified car battery, through to very automated high-end battery production systems. Sat toward the budget end of the spectrum, you quickly find SUNKKO branded machines with a range of features. We opted to take a look at the SUNKKO 709A machine (£169), which isn’t the cheapest model at £169, but offers the range of features we wanted.

The 709A is primarily a spot welder designed to spot-weld thin nickel strips to steel battery terminals. The 709A also, however, has a soldering iron channel and attachment. Soldering directly to battery terminals can be dangerous and the heat and the duration of heat from soldering directly to battery terminals can damage some batteries and is generally best avoided, and hey, that’s why we have a spot welder, right? The inclusion of a soldering iron may not be an important feature for many who have a choice of irons already, but often you may want to solder wires onto the nickel tabs you have created to finish the pack, and an all-in-one system might save you some desk space. 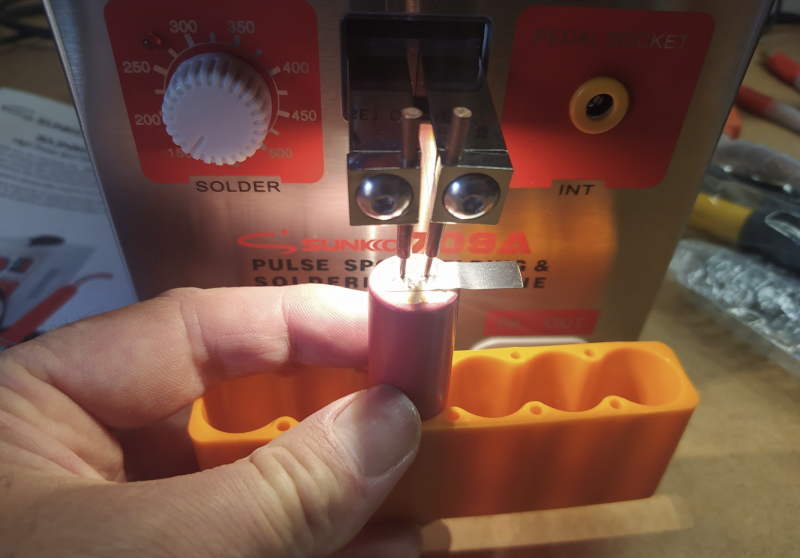 The unit arrived very well packed, and inside the box, there is a pleasing range of accessories, including two bags of nickel-plated iron strips, a 18650 battery holding jig, spare welding probe tips, the soldering iron, soldering iron stand, and more. Also included is an external pen probe welding attachment and a foot switch.

The standard way that this machine works is using the on-board welding system. In the centre of the machine are two metal arms into which you insert the welding probes. On our machine, one of the holes to receive a probe had a tough burr inside and needed some work with a tiny file to allow us to insert the probe. Once set up, the idea is that you press the work against the probe tips and push upwards. At the top of travel of the two welding arms, click a switch to fire the welding system and create the weld; this system means that a good amount of pressure is applied to the weld and the level of pressure can be adjusted by turning a knob on the top of the unit. You can adjust the power and the pulse count for each weld on the machine using simple radio buttons. You can then adjust the power with the current adjustment dial. We found that when using the thicker nickel-plated iron strips (0.15 mm), we would get a decent weld at four pulses with the power dial set up at 7. We imagine this would be different with each machine and also with different materials. Often people get better results with pure nickel strips rather than the plated nickel-iron strips. 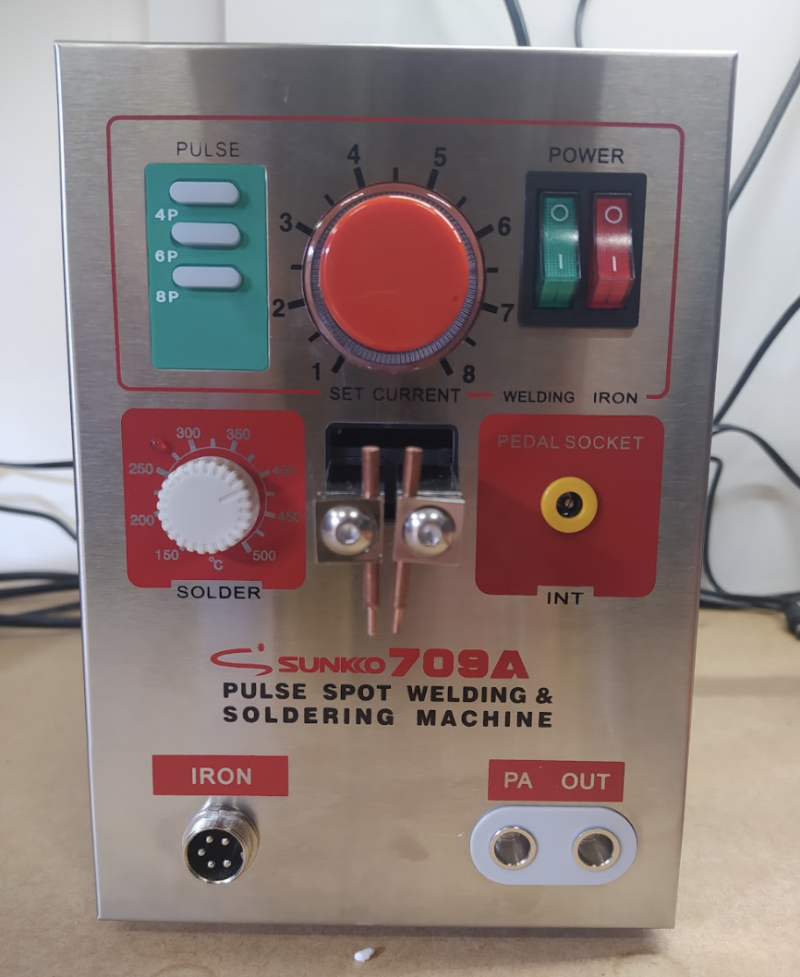 One of the reasons we were interested in this particular model is that it offers the pen probe welding attachment to enable you to assemble larger pieces further away from the machine.

To use the pen probe, you have to also attach the foot switch to trigger the spot weld rather than any automated system. Whilst our pen probe does work, we have a pretty major flaw on our pen probe attachment. Our probe cables are covered in the spiral plastic wrap that is often sold or bundled with machines as a cable tidying system. Unwinding some of the spiral wrap revealed a situation that our copper cable underneath was not insulated in any way, confirmed with some continuity testing with the multimeter. Whilst the output through these cables would be quite low voltage, it would certainly be possible to spot-weld the cables together if they touched through the gaps in the spiral wrap. We haven’t seen or read discussion of this problem, so it could be a ‘Friday afternoon’ machine that we acquired and others have better insulation but, as ours stands, we have marked it down heavily for this issue.

In use, we have been able to create strong welds with this machine, and it’s worked reliably with repeated sessions of spot welding. The soldering iron system also works well and is certainly usable for the scale of work intended: soldering battery and balance cables to battery packs.

A good machine marked down for the slight fault in the hole to attach the on-board probes, and the issue with insulation on the pen probe attachment.