The Pico robotics board is a new device from Kitronik aimed at getting you up and running with robotics projects on the Raspberry Pi Pico as quickly as possible. It has a huge range of features including the ability to drive up to four DC motors bidirectionally, driving up to eight servos, and the ability to drive stepper motors. On paper, the Kitronic Robotics Board for Pico is a very capable board, but does it live up to this?

With everything soldered and pre-installed, your Pico slots into a set of headers. The USB port is still available for programming the Pico, but the board itself has its own power input and a hardware on/off switch. The addition of a power switch is great as it can potentially act as an on/off switch for your entire robot project. You can wire up a power supply in the range of 3.0 V to 10.8 V, but the suggested useful range is 6–10.8 V. Power connections are made via a terminal block; alternatively, there is a servo-style connector  available as well. This is a great design choice, as many people building robots may be using hobby RC-type components, such as battery eliminator circuits (BECs), so servo connectors may be readily available. 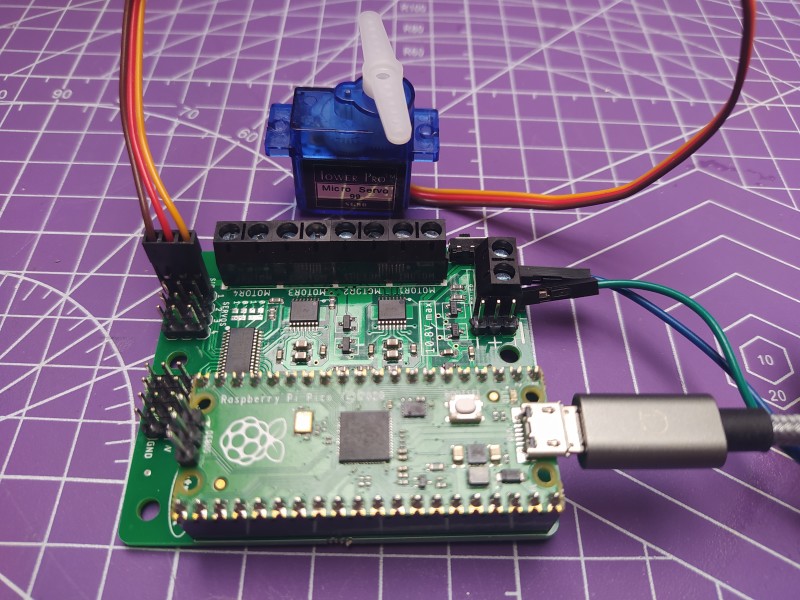 Connections for the DC motors are again made with terminal blocks and screws, and the connectors for servos are the standard three-pin servo headers. We are pleased to see that this robotics-aimed board has bidirectional control of four DC motors. There are a lot of boards on the market that only seem to offer bidirectional control of two motor channels, which is fine for smaller robots or rovers with tank-style steering, but if you want to build a true AWD or a Mecanum-wheeled robot, then having four bidirectional channels is extremely useful. There’s a maximum continuous current rating of 12 A for all attached motors and servos, and each motor channel can handle up to 1.5 A. This amount of power opens up a good range of DC motors that you can run with this board. 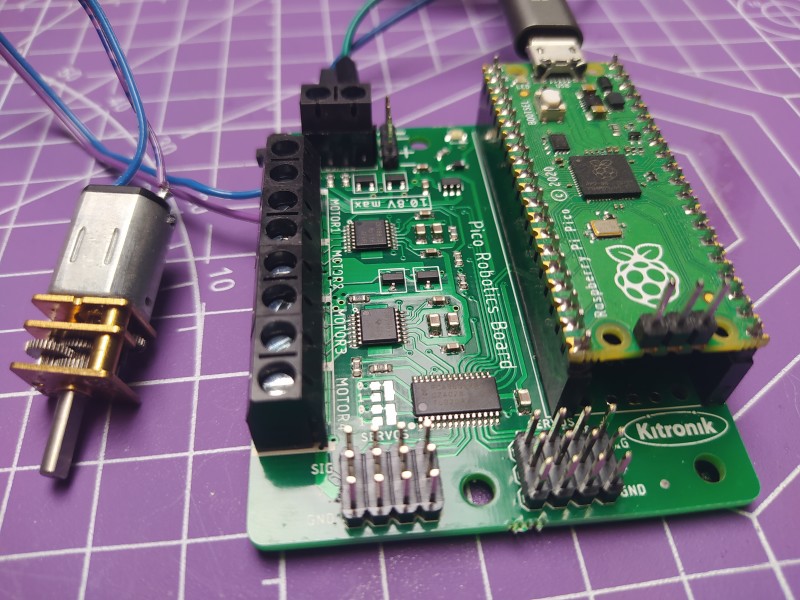 Your Pico mounts to the board using header pins, and there’s a big USB marker on the Kitronik board to ensure you orient the Pico correctly. The Pico sits over an area that has three rows of copper pads, with the outer rows breaking out the remaining 27 I/O pins that the board isn’t using. The centre rail has positive and negative pads to connect additional items to the robotics board power supply. The power supply for the board and motors is regulated and used to power the Pico. Also of note is that if you plug in the Pico USB to power and program the Pico, the USB power is not passed through to the board. It means you can power down your robot experiment and hook up the USB to tinker with your code without worrying your robot will suddenly make a leap for the edge of your desk.

Links are supplied to the GitHub repository for a MicroPython module and some example code. There’s also a handy Kitronik blog post linked on the product page and on the GitHub repo, talking about how to get the examples up and running. It’s pretty straightforward – download the zipped file from GitHub, extract the contents, and then copy the PicoRobotics.py file onto the Pico. You can then explore and run the other example codes supplied. Using a bench supply set to 7.4 V (emulating a two-cell battery we often use in robot builds), we worked through a couple of tests. We connected a DC motor and ran the SingleMotorTest.py code which turns on each motor channel in turn, ramping the speed up and down in one direction and then the reverse direction. We repeated this process running the SingleServoTest.py code with a 9 g micro‑servo attached. Both worked perfectly and the code is commented well. The README file on the GitHub is also a good primer on writing simple scripts for this board. One thing to watch out for is that if you save the examples to the Pico using Thonny and then run the script from Thonny without the robotics board attached, you will get error messages as it can’t detect the board.

The Pico Robotics Board has a nice size and layout, with multiple M3 mounting holes. It’s small enough that it would fit into a Mini Sumo class robot chassis, but its feature set and driving capabilities mean it could be used in much larger and more complex robotics projects.

An excellent well-thought-out robotics board with a heap of capabilities and great example code.