Available for between £12 and £21, the AK370 amp is quite a lot of technology stuck into a pretty rugged metal enclosure. It arrived well-packed, with just the amp and a small, plastic remote control.

The amp doesn’t come with a power supply (and indeed the remote doesn’t come equipped with a battery), but it takes a 12 V supply via a small, common barrel jack, so we didn’t have to look far to find a suitable supply.

It suggests on the packaging that it isn’t fussy about what type/impedance speaker drivers you attach to it and, to test, we had a set of small 4 Ω speakers in our parts hoard. Speaker connections are made with small, sprung clip connectors that we hadn’t seen the like of for a while, but used to be the most common speaker connector on mass-produced domestic hi-fi systems. Also in the box is a small connector and half a metre of wire that can be plugged in at the rear as an antenna for the FM radio. 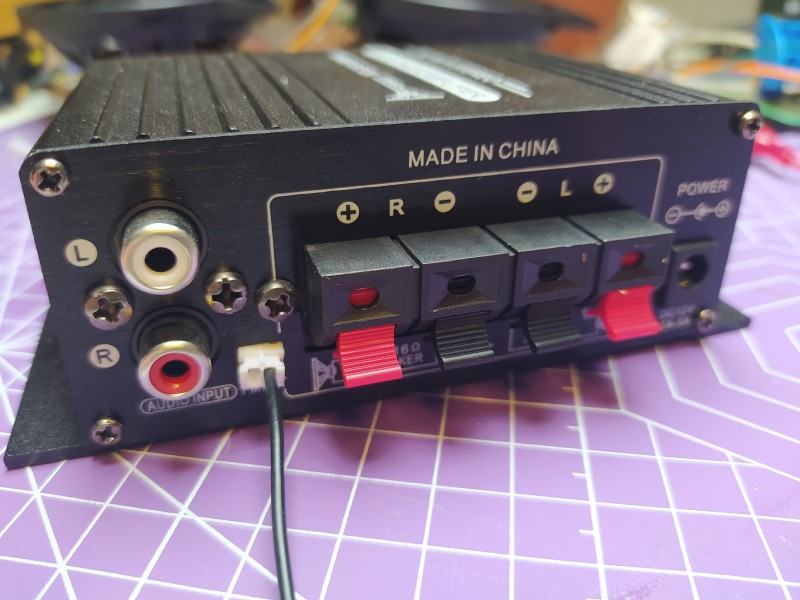 Powering on the unit, we found it paired with our Android phone with no problems at all and works perfectly as a phone speaker for listening to music, podcasts, or for watching video content. Whilst this is definitely not destined for use by audiophiles in high-end systems, it’s true to say that this thing is loud and also clear, with no audible distortion. It was certainly powerful enough to drive our admittedly small speakers too hard, and would probably sound even better with larger drivers.

There’s volume and bass and treble adjustment on hardware ports on the unit, and a small selection of buttons that allow you to switch between modes, Bluetooth, line input, USB/SD card, and FM radio. 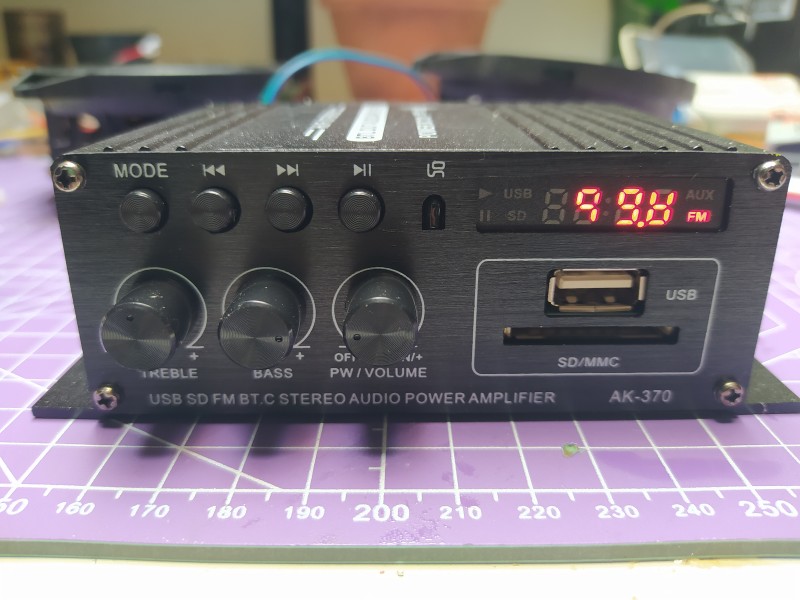 Without using the remote, it doesn’t seem possible on our device to tune the FM radio, but once we popped a CR3032 battery into the remote, it was pretty easy to do so. However, whilst we’ve worked out how to tune the radio and save station presets, we haven’t worked out how to switch between them on the remote! We loaded a USB drive with a few albums of MP3s, all arranged into album folders placed in the root directory of either the USB drive or the SD card. It worked flawlessly to find the MP3s and play them, and we could quickly skip through tracks. It also (unlike other cheap MP3 circuit boards we have used previously) manages to ignore album art image files and bonus files in album folders, which is excellent. There’s a random setting accessed via the remote, that allows playback to be limited to the end of the current track, rather than continual play, and we were pleased to note that even after a power-down, if the USB or SD card hasn’t been removed, it will continue playback from the track position when the unit is next powered on. That’s pretty crucial if you don’t want to have to scroll through lots of tracks each time you use the device.

The line input is via two phono sockets on the back of the unit and, again switching to line input, everything works well. Handy, we guess, if you wanted to use the amp for playback from something without Bluetooth, like a portable digital recorder.

We aren’t quite sure what the intended use case for this amp is – being 12 V, it’s useful in vehicles, and we can imagine it being used as a device perhaps in a camper conversion. Likewise, it’s cheap and rugged enough to be used in a workshop or shed, it takes up little room, and could be screwed/bolted to a shelf or the underside of a workbench with ease. It runs consistently, seems reliable and, as a budget device, we did think it could be very useful for art installation-type work.

As for ours, we think it’s destined to be mounted into a scrap-built box containing a couple of speaker drivers – a decent shed solution that can run off an old 12 V bench supply, or a 12 V battery if needed.